By Clément Nedelcu - October 13, 2011
Ever since I was offered an iPod touch 4th gen I have been unsuccessful in my attempts to connect to PPTP based VPN servers from iOS. Apparently this is a well known issue since iOS 4.3.3 or earlier, that did not get fixed in the iOS 5 update.

Having set up my own PPTP-based VPN servers using Poptop (also known as pptpd) under CentOS, I always found it strange that my servers would function perfectly fine under all versions of Windows, but completely refuse to work under iOS and reportedly MacOS X as well.

Symptoms were the following:
Finally after a combination of multiple tweaks I finally got it to work! The solution is given below but I'd like to credit people first. First I used the DD-WRT tweaks as I previously said, then I followed the tips of two users who posted on this page, sid2 and jeremy207. Massive thanks to both of them!

Here's what got it to work for me. You need to open up the options file for pptpd usually located here: /etc/ppp/options.pptpd
At the very bottom of the file, insert the following lines:

After saving the file, make sure to restart pptpd properly (I stopped it and started it again completely) and try connecting from iOS again. Worked for me! Hope it will for you as well.
pptp vpn ios pptpd poptop problem fix

is it working with iOS 5, i tried your solution and the page u referred to but somehow its not working for me. It randomly disconnect.

Clément Nedelcu said…
Yes it's working fine for me with the latest iOS. Have you tried connecting from another internet link (at work, at a friend's, in a public place, etc.) might be your connection?
Wed Jan 25, 05:17:00 PM

Anonymous said…
Anyone know how to get external browsing to work? I can VPN and get internal access but routing back out fails.
Fri Sep 26, 06:00:00 AM

Anonymous said…
To get out to the Internet, you have to let the ppp device through your firewall. For iptables, this should work.

You probably have the first 2 rules, or you couldn't get a pptp connection.

The 3rd allows connections from one side of the connection to the other (FORWARDing the ppp connection through the firewall (your pptp server) to either the internal or external connection (you can limit where it is allowed by using -o where device is your wan or lan device (eth0 maybe? Sometimes vlan0). As is, PPP is allowed anywhere, external or internal..

The 4th allows connections to the firewall itself from the PPP connected client. (May not be necessary, but it may be if it is doing DNS, etc)

Blogger said…
BlueHost is definitely one of the best website hosting company for any hosting services you need.
Fri Oct 27, 08:20:00 PM

Popular posts from this blog

This tutorial will take you through the steps of setting up and configuring a simple mail server (SMTP, POP3, IMAP) on Debian/Linux. The instructions will be given for Debian, but they can be adapted quite simply to other distributions such as Ubuntu and other Debian-based OSes; you could even pretty much follow the same steps if you're running Red-Hat based systems such as CentOS or Fedora. I can promise you that this is as easy as it gets, provided you have correctly verified and validated the pre-requisites step. What we will achieve in this tutorial We will be setting up a simple email server with the following basic functionality: The server will be able to both send (via SMTP) and receive emails (via IMAP and POP3) optionally with SSL functionality User accounts and  passwords will be encrypted and stored in a simple text file , which can be managed easily with a text editor. It will support a potentially infinite amount of mailboxes over one or more domains As
Read more

By Clément Nedelcu - May 10, 2010
Today I'll write about something I experienced personally, on my websites. Some visitors reported that they were getting a "400 Bad Request" Nginx error randomly when visiting pages. And when they start getting that error, they can't access the site anymore: it'll output the same error no matter the page, until you "clear your cache and cookies". The error is easily understandable and is likely to be caused by... too much cookie data. Every time a visitor loads *any* page/content/file of your website, it sends the cookie data to the server. Cookie data is sent under the form of 1 header line starting with "Cookie: ". Basically, Nginx by default is configured to accept header lines of a maximum size of 4 kilobytes. When a line in the headers exceeds 4 kilobytes, Nginx returns the '400 Bad Request' error. Cookie data sometimes gets big, so it causes the error. It particularly happens on forums like vBulletin, Invision and others
Read more

How to fix: Outlook on iOS/iPhone: "No Internet Connection" 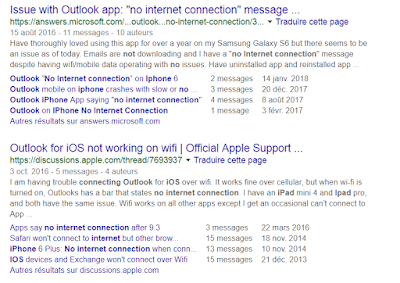 Microsoft Outlook is probably one of the best (if not the best) email client for iOS to date. Sadly, you may run into a random annoying problem which basically renders the application useless: it displays a message saying " No internet connection ", at which point you can't receive or send emails anymore. The number of people having this issue is incredibly high, as I discovered when it happened to me yesterday: After reading all of these posts and many more, there did not appear to be a particular solution for this. I had already checked the following: my Internet was of course working properly, on both WiFi and 4G I made sure to allow data/internet usage for the Outlook app I made sure my email accounts were working properly (they work fine on the Outlook desktop app & web) I tried enabling or disabling push notifications but that did not help I tried to use the 'reset account' functionality in the Outlook app settings for each of the accoun
Read more